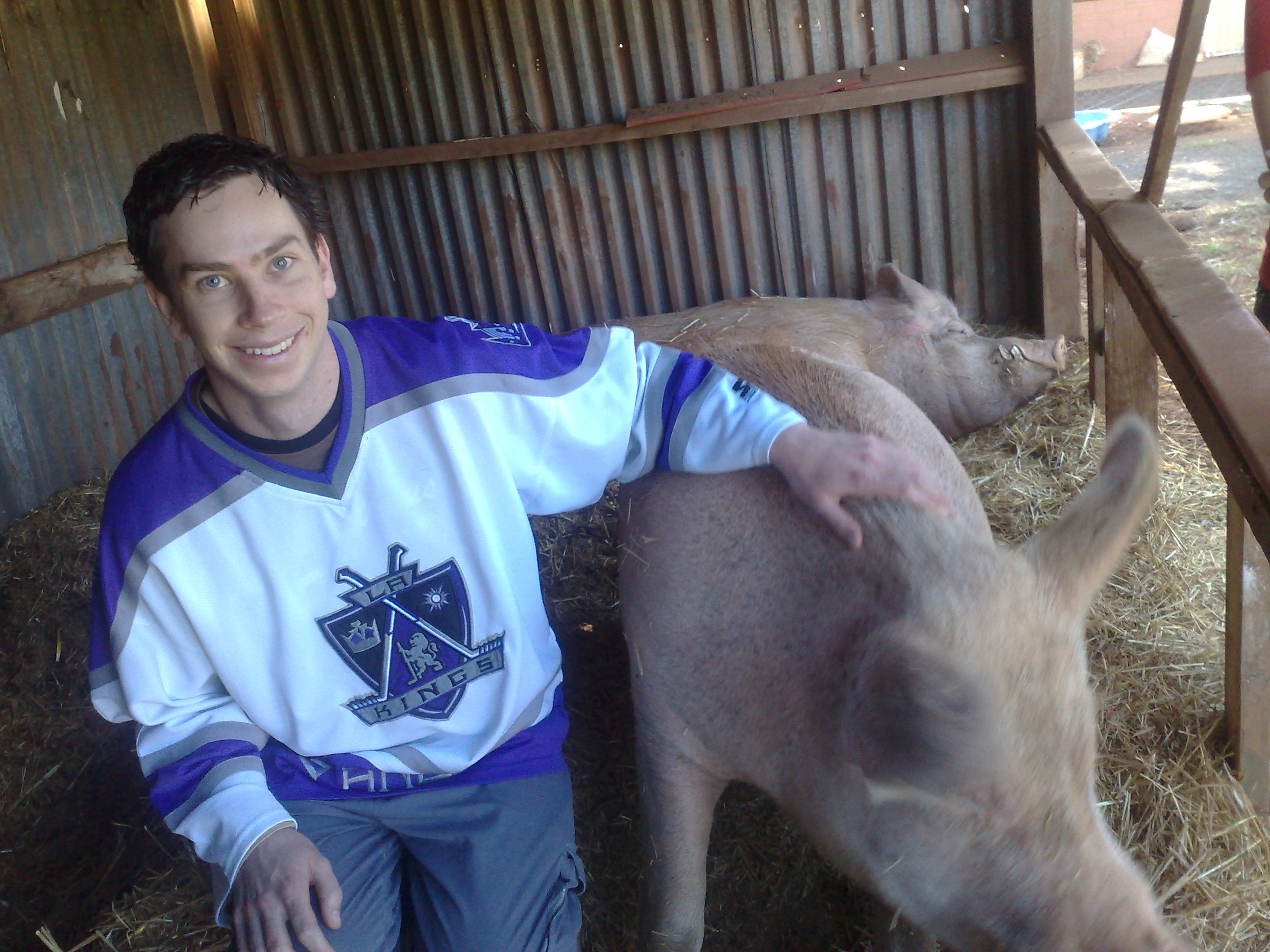 Nick and a buddy at Edgar’s Mission Farm Animal Sanctuary.

It is accepted by nearly everyone that “unnecessary suffering” to animals is wrong. Many Australians are outraged by Japanese whaling, Canadian seal clubbing, live animal export to the Middle East, and cruelty to cats and dogs.

These are obviously acts that cause “unnecessary suffering” to animals, and a vegan lifestyle clearly opposes such cruelty, but this lifestyle also opposes similarly unnecessary, but much more socially accepted, examples of unnecessary animal suffering.

Products such as meat, dairy, eggs and leather all necessarily involve a lot of suffering. Animals raised for such products suffer in a number of ways, from pain, fear, confinement and sadness (such as when a female cow has her baby taken away so her milk can be used for human consumption), and of course they are slaughtered.

For more on this horrible aspect of the dairy industry, see: http://www.peacefulprairie.org/outreach/grievingMother.html

Not only do these products directly and necessarily lead to animal suffering, but they are totally unnecessary. The fact that we don’t need these products is shown by the growing numbers of vegans from all “walks of life” who are living very healthy lives and easily meeting all of their dietary requirements while avoiding the use of animal products. 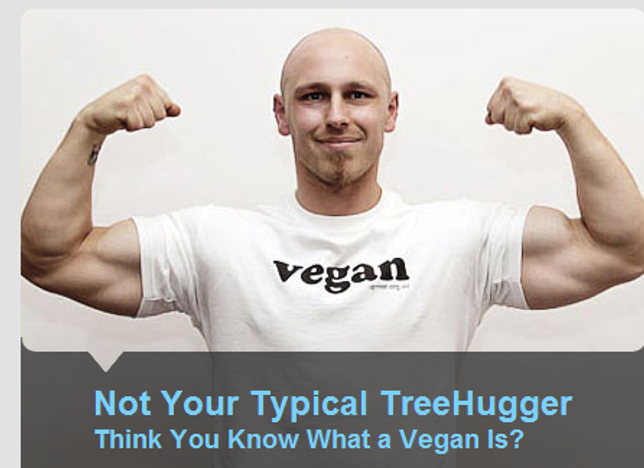 See Uproar’s campaign ‘Not Your Typical TreeHugger’ for more on this: http://www.treehugger.uproar.org.au/

Mainstream health organisations such as the American Dietetic Association also advise that animal products are in no way necessary for our health. Their position is that: ‘Appropriately planned vegetarian diets, including total vegetarian or vegan diets, are healthful, nutritionally adequate, and…appropriate for individuals during all stages of the life cycle, including pregnancy, lactation, infancy, childhood, and adolescence, and for athletes.’

There are two main reasons why we promote veganism over vegetarianism. First of all, veganism puts into practise vegetarians’ desire to not kill animals for food. Dairy and eggs are both just as unnecessary as meat and, just like meat; they involve the killing of animals.

The RSPCA, who are not opposed to people consuming animal products such as dairy and eggs, state that the killing of animals is standard practise in these industries. The RSPCA explain a necessary component of the dairy industry: ‘In order to produce milk cows have to give birth to a calf every year. Bobby calves are the unwanted male offspring born to dairy cows…At around four days old these calves are then transported to an abattoir to be slaughtered for veal.’ 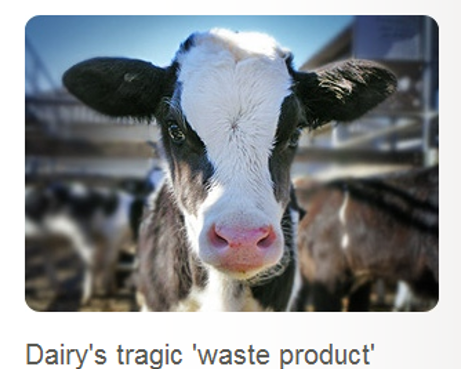 The RSPCA also reveal a similar process in the egg industry: ‘Male chicks are considered an unwanted byproduct of egg production and are killed and disposed of shortly after birth… Male chicks are killed for two reasons: they cannot lay eggs and they are not suitable for chicken-meat production.’ 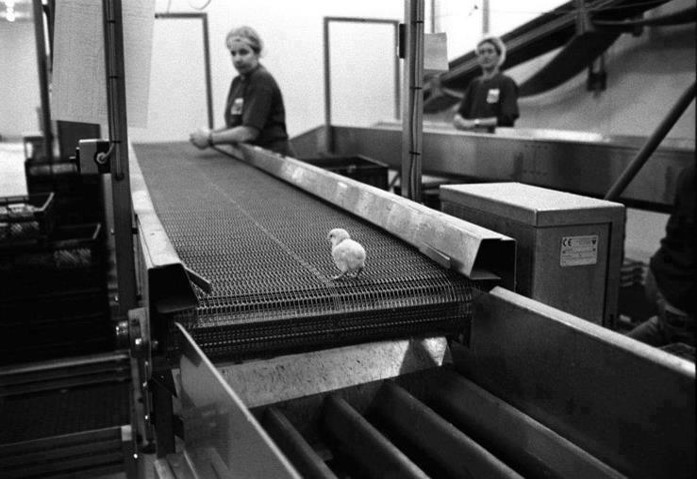 Male chicks are killed in various horrible ways in the egg industry, simply because they are not profitable.

Peter Singer and Jim Mason sum up the suffering and death in both the egg and dairy industries in their book The Ethics of What We Eat (pages 255-256):

‘Suppose, however, that you object to the idea of killing young, healthy animals so you can eat them. That ethical view leads many people to become vegetarian, while continuing to eat eggs and dairy products. But it is not possible to produce laying hens without also producing male chickens, and since these male chicks have no commercial value, they are invariably killed as soon as they have been sexed. The laying hens themselves will be killed once their rate of laying declines. In the dairy industry much the same thing happens – the male calves are killed immediately or raised for veal, and the cows are turned into hamburger long before normal old age. So rejecting the killing of animals points to a vegan, rather than a vegetarian, diet.’

Veganism requires people also avoid other instances of animal suffering beyond food, such as clothing products like leather, as well as household products such as soaps and shampoos that contain animal-based products or are tested on animals. These products involve a lot of unnecessary suffering. 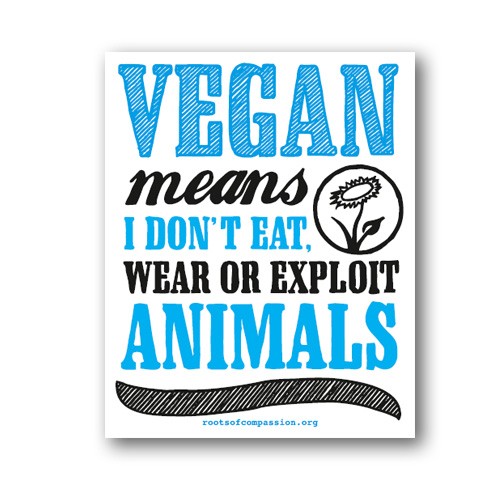 It’s okay, my eggs are free-range

Labels such as “free-range”, “organic” and “humane” on animal-derived products may make us feel better about consuming animal products, however, they do not necessarily guarantee significantly better treatment than factory farmed or caged animal products. This has been confirmed through investigations by organisations like Animal Liberation Victoria.

Even in some hypothetical situation where “humane” meat, dairy and egg products actually did significantly improve treatment and conditions, we are still placing our enjoyment of consuming animal products above the lives of animals.

The powerful video embedded above shows that no animal goes willingly to slaughter and that the slaughter harms animals in itself, even if they are given more space throughout their lives, even if they are killed more “humanely” etc. The video is disturbing to watch but does not show blood or slaughter – just the process leading up to it. The interview below, with scientist Dr Jonathan Balcombe, also makes this point about the slaughter of animals being harmful in itself, based on his research into animal behaviour.

Regardless of the “humane” label, the males are still killed soon after birth in the egg and dairy industry. The females in these industries are also killed, in the same slaughterhouses as those animals raised for meat, as soon as they are no longer “productive”. These realities mean that there is always suffering and death in these industries. In some cases there may be less suffering, but less unnecessary suffering is still unnecessary suffering. 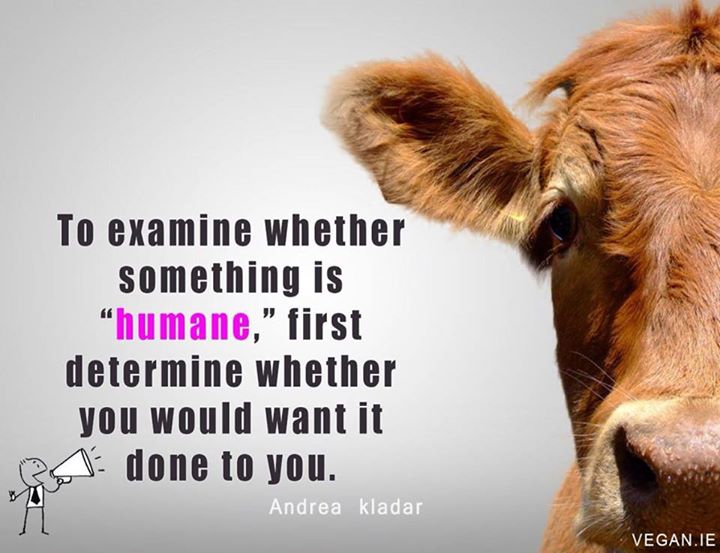 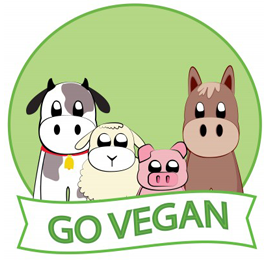 See the flyer ‘Why Love One But Eat the Other?’ by Animal Rights Advocates – available below: 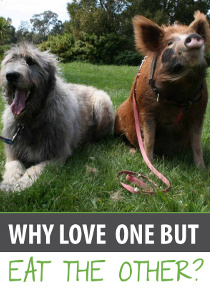 The format and ideas for this section of the site were inspired by the Boston Vegan Association’s pamphlet ‘Respecting Animals Means Going Vegan’ and the animal rights philosophy of Gary Francione.