Hybrids or Hummus: Which has the Biggest Impact?

When we think of what we can do to help the environment, the first thing that may come to mind may be actions like replacing our existing car with a hybrid. However, researchers from the University of Chicago found that people can actually do more for the planet by changing to a vegan diet than replacing a standard car with an eco-friendly one.

This article will cover some of the environmental benefits of choosing plant-based foods rather than animal products.

In the study by researchers from the University of Chicago referred to above, they found that a standard diet containing animal products was responsible for nearly 1,500kg more carbon dioxide per person per year than a vegan diet. Other studies have found similar results. For example, an academic survey of over 55,000 people found that ‘dietary GHG [greenhouse gas] emissions in self-selected meat-eaters are approximately twice as high as those in vegans’.

The environmental impact of animal agriculture has also been highlighted by significant institutions, including the Food and Agricultural Organisation of the United Nations. In their report ‘Livestock’s Long Shadow’, they revealed that animal agriculture was responsible for 18% of worldwide greenhouse gas emissions, more than all forms of transport combined (13%).

A few years later, the Worldwatch Institute, on behalf of the World Bank, found that the Food and Agricultural Organisation of the United Nations had ‘vastly underestimated’ the impact. The Worldwatch Institute calculated that animal agriculture was actually responsible for a staggering 51% of worldwide greenhouse gas emissions.

Around this time, the United Nations strongly recognised the environmental benefits of veganism. A United Nations report argued that: ‘A substantial reduction of [environmental] impacts would only be possible with a substantial worldwide diet change, away from animal products’. The report concluded: ‘A global shift towards a vegan diet is vital to save the world from hunger, fuel poverty and the worst impacts of climate change’.

The world’s cattle alone consume enough food to feed 8.7 billion people – more than the entire human population. This sometimes leads vegan advocates to argue that our consumption of animal products is causing poverty. This is not entirely true, as even with the wasteful practice of animal agriculture, there is still enough food for everyone – the problem is unequal distribution rather than not enough food.

However, at the very least, what is absolutely clear is that animal agriculture is inefficient. It requires about 6kg of plant protein to be fed to animals to produce 1kg of animal protein. So if we’re eating animal products, we’re putting in a lot more than we get out. This helps to explain why a “standard Western” diet with animal products consumes over 907kg of grain per person per year, whereas the typical plant-based diet requires less than 205kg. This is part of the reason why animal-based foods have a much bigger environmental impact than plant-based foods. It is very clear that it is more efficient to consume plant-based foods directly, rather than feeding these foods to animals and getting the nutrients “second hand”.

Water is clearly a major problem for Australia, but how do we address it? Standard solutions include actions such as shorter showers. While this helps, what we eat is actually far more important. Our direct household use of water is far lower than the impact of an average Western diet:

From page 5 of the booklet ‘Eating Up the World’ – which is sadly now unavailable online.

While obviously plant-based foods require some water use, their impact is dwarfed by the water required for animal products. 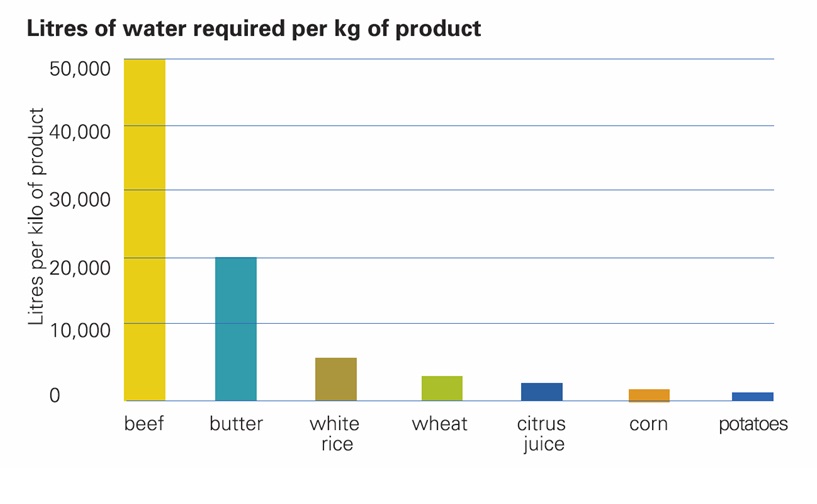 From page 4 of the booklet ‘Eating Up the World’ – which is sadly now unavailable online.

The above graphs clearly show that choosing plant-based rather than animal-based foods is an important way we can substantially reduce our water use.

Our oceans are in trouble. According to one scientific study, ‘there will be virtually nothing left to fish from the seas by the middle of the century if current trends continue’. 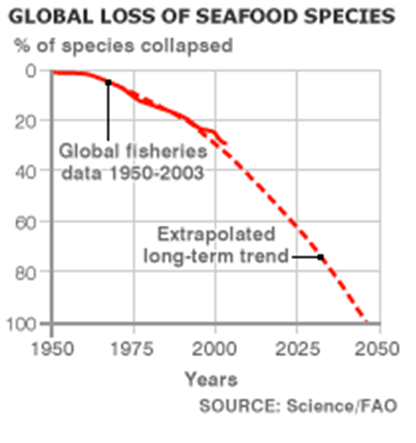 Cutting out our consumption of fish and other sea creatures is one obvious step we can take to address this problem. However, our consumption of products from land animals is also a part of the problem, as fish are fed to farmed animals. In fact, the Institute for Ocean Conservation Science found that: ‘Pigs and poultry around the world consume more than double the seafood eaten by Japanese consumers and six times the amount consumed by the U.S. market’. So cutting out all animal products can really help the oceans.

Animals and the Environment

Surely caring about the environment includes caring about the other animals we share this environment with. And it seems that most people do. In fact, according to a recent survey of over 1000 Australians, ‘99% of Australians are against cruelty to animals’. Now, people can think about how they define cruelty to animals, and individuals will vary in their definitions.

However, in such a discussion, it is important to realise that all commercial animal products, even humanely labelled ones, involve animal slaughter. It is also clear that in our society, there is no nutritional need for animal products – we can clearly be healthy without them. So not only do animal products involve the slaughter of animals but they are totally unnecessary. Putting animals through this unnecessary slaughter (regardless of how big their cages are, how “humanely” or otherwise they are slaughtered and so on) is animal cruelty, in my opinion.

Veganism is a powerful action we can take both for the environment, as well as for the other animals we share this environment with. 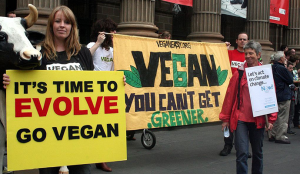